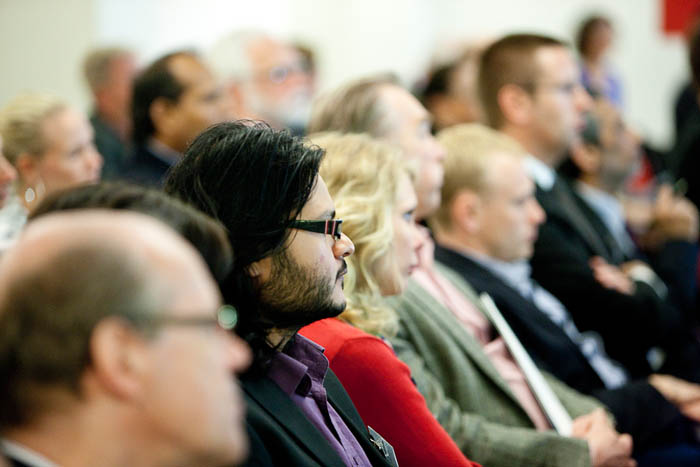 We make history here and know!

An enthusiastic Ulrik Nilsson, mayor of the City of Borås, opened this year’s Next Textile Borås by establishing the event’s role as a promising hub for development and growth. He illustrated his statement with the ‘X’ in the Next Textile logotype, a symbol for the intersection between new ideas and new business opportunities. Next, the international audience with guests from Bangladesh, Germany, France, and Japan became acquainted with Marcus Bergman, moderator and a well-known Borås personality, who prepared the stage for some of most vital representatives for the textiles industry, with a skilled hand.

[DAY 1: 24 MAY]
Sustainability: Cooperation and coordination

In his speech, Albin Kälin, CEO of EPEA –the organization behind the Cradle-to-Cradle paradigm – touched upon the importance of dynamic business networks, where different industries and even rival firms get together and find solutions to the sustainability challenges facing the world. Kälin called it “Coop-petition” – healthy competition and cooperation in one. Companies must dare to think in unconventional paths, is another vision that Albin Kälin urges for. He exemplifies with Ford’s ‘Model U’, a cradle-to-cradle car that was introduced as a prototype around the year 2000. Unfortunately, Ford shut it down since they didn’t believed in the concept. With hindsight you could ask how happy Ford is with that decision today. EPEA itself has also undergone radical change; the focus has shifted from “hunting” problems in companies to a more consultative role with advice and guidance. Detlef Fischer from Bluesign also stressed cooperation as a key issue. He highlighted his reasoning with The North Face, a company that actively participates in many global networks in order to improve their environmental performance. ‘Sustainability as a team sport,’ was one of his statements. Thus, the lesson for the textile industry from day one is: Cooperation and courage to take the initiative.

Innovation – not always that innovative

Orren Shalit – entrepreneur and founder as well as CEO of SIT Scandinavia AB, where SIT is short for Systematic Inventive Thinking – woke up the audience with his refreshing and occasionally provocative insights of today’s search for “innovation”. Innovation is far more than product development, according to Shalit. The mistake many companies make is they seek high and low for “new” ideas and angles, when the answer to what make their products or services more competitive, lies in developing existing business ideas. Instead of thinking outside the famous “box”, it’s more important to define the box and search within it. Good ideas don’t come as a bolt from the blue; systemize and make your innovation process more effective, and learn to break your monomania, was the hands-on advice from Orren Shalit.

The panel debate:
Sustainability – Whose responsibility?

Emmanuelle Butaud-Stubbs raised the question already in her own speech and she took it further during the debate: We must all be better to handle sustainability issues and act more environmentally, but whose responsibility is it? Is it the EU? The national governments? Companies? Or the individual? The debate sparked of immediately and engaged the audience – why do we have all these different labels, symbols and definitions, can’t EU agree on a standard? Are increased quality and more long-lived products the way to go? The shirts we wear today are tomorrow’s vintage, stated Jan Borghardt from Eton. He meant that small-scaled textile production with high quality could be a fully realistic scenario for Borås once again. The debate revived when Marcus Bergman asked how long the fashion industry’s ethical shortcomings with production in low-wage countries could go on. And Emmanuelle Butaud-Stubbs backed him up. She said we have come a long way environmentally, and continued with a rhetorical question: But what about the social sustainability of the textile industry? A question that stayed in the mind of everybody as the day moved on to the evening festivities – and a continued conversation where the ceiling is high.

The research director Lutz Walter painted a promising future for the textile industry: ‘Vision 2020 – Textile innovation for a better Europe.’ He envisioned a future where sectors as construction, technology and healthcare will see a growing need for smart textiles and fibres. Walter also forecasted solid growth for the more traditional part of the textile industry, where Europe’s fashion and design expertise will play a leading part on the global scale. The time speaks for textiles, according to Walter. Textile materials have a diversity and usability that other materials lack. Lutz Walter, who represents Euratex, the European Apparel and Textile Confederation, also believe that the industry has much to gain from EU, where they can seek support to develop their business. And the link to EU is Euratex, who supports and guides companies in the application process. Join a growing and competitive network already today and secure your future, said Lutz Walter as he concluded his speech. 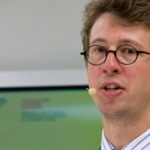