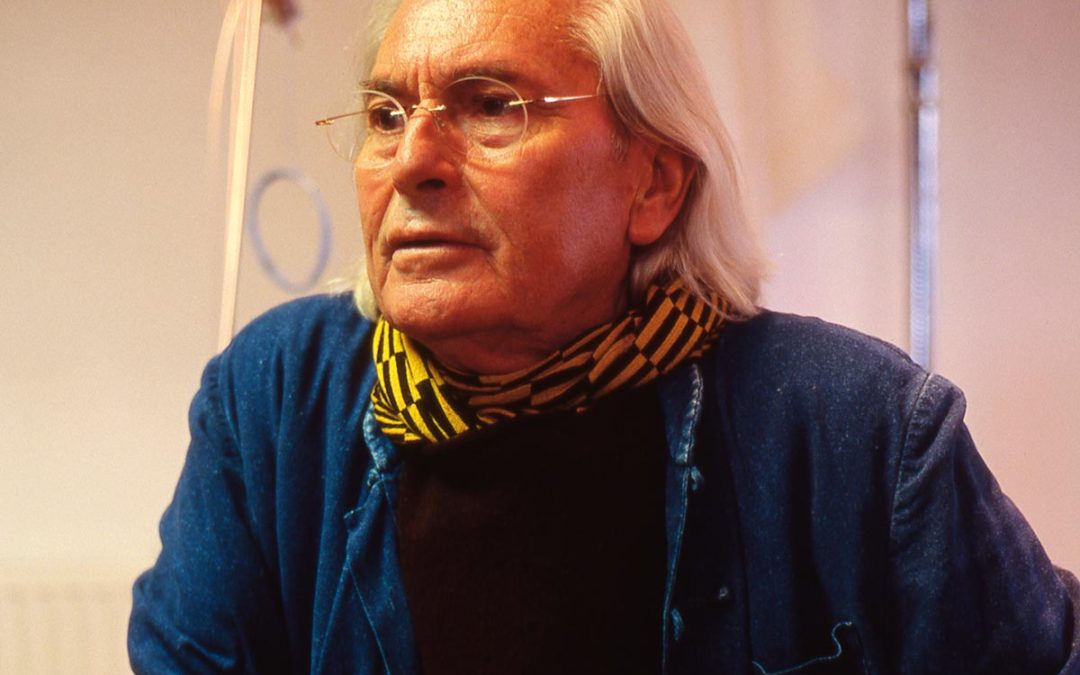 Finally in Sweden:
The poet of light
– Ingo Maurer

On the 2nd of February 2009 you will get the chance to meet some of the most talked about pioneers and provocateurs of today’s lighting design scene:
The veteran Ingo Maurer and the innovative heirs – Paul Cocksedge and Moritz Waldemeyer. Seats are limited.

Come 2009, and the light bulb will have been around for an amazing 130 years. And surely Thomas Alva Edison’s simple solution for converting electricity into light can take the credit for many of the amenities and success stories of modern civilisation. For what indeed would the age we live in be without unlimited access to abundant, albeit artificial, daylight around the clock?

However, in the very near future, lighting as we see it will change radically. The development of diodes, for instance, is on the eve of a breakthrough. And although a sales boom is still years away, the new already available technology is affecting everything from modern vehicle manufacture to architecture, traffic systems and home electronics. Lighting is not just a matter of lux, whether switched on or switched off. Lighting has become a way of commu¬nicating – to convey feelings or bring feelings to life – as has been proved in leading-edge textile research and the most progressive expressions of architecture.

“Light Now left me with the great memory of the ultimate combination of professionalism and a warm and friendly atmosphere. FutureDesignDays is the design conference where everybody together – speakers, audience and organizers – create the whole event. This challenges the speakers to give their best and it creates great energy.”.
Vesa Honkonen – speaker at Light Now 08

Who is Light Now aimed at?

Will FutureDesignDays Light Now be an event solely dedicated to designers and architects? No, it is aimed at anyone and everyone who wants to be at the forefront when it comes to future business opportunities and the monumental changes in a number of areas that the explosive development in the lighting field will bring about. FutureDesignDays Light Now will provide professionals who never or only rarely meet one another with an opportunity to make unique contacts and, in turn, prepare the ground for further business. So, a CEO will derive as much benefit as a student, but also
> Marketing manager or marketer
> Product developer, product manager
> working with brands and communication

FutureDesignDays is a process that is intended to capture complicated contexts – and present them in a form that is both understandable and inspiring. For us design is about thinking in terms of people’s needs, what life itself demands from these things. If we think in this way, we end up a long way from the posh shop street. Instead, we come closer to a view of those things about us that have to do with business ideas, the drive, in fact, to run a business or a brand. FutureDesignDays is a thought-provoking meeting place for designers, business leaders and decision-makers, who share these ideas.

The king of light
To call him the king of lighting design is probably an understatement; during his 40-year career more than 200 unique products have been designed in Ingo Maurer’s studio in Munich. His style and technique has always been as trendsetting as it is astonishing. From the beginning he has defied current ideas of what electric fittings should look like. FutureDesignDays is proud and sincerely honoured to welcome “The poet of light” Ingo Mauer to Sweden for the first time.

Ingo Maurer is a self-made man; he does everything by himself from scratch, even the advanced technique that you can find in his electric fittings. He is intuitive and really goes with his gut. His style is, according to an interview in International Herald Tribune, “a combination of the best parts from German culture”; some Bauhaus, a bit of modernism and some dashes of romance. Maurer had his real breakthrough in the 60’s, turning the world of design upside-down with his icon-lamp Bulb, a lamp that looks like a naked, gigantic light bulb. Since then his work has been continuously mind-boggling and refreshing. For example: lighted up tin cans, electric fittings dressed in feathers or broken china. Ingo Mauer is an artist who continues to challenge and provoke to prove it’s possible to combine the incompatible. His biography from 2002, “Passion for light” is literally a telling example of Maurer’s philosophy. Of course the book isn’t just a book; it’s also a lamp.

Ingo Maurer was born in Germany in the early 30’s. He began to study graphic design. In 1960 he moved to USA earn his living as a free-lancing designer in New York and San Francisco. Some years later he returned to Germany and 1966 he started his own studio in Munich. You can see all of Ingo Maurer’s classic pieces at the Museum of Modern Art in New York; Bulb, Gulp (1969), Light Structure (1970), Little Black Nothing and YaYaHo (1988) as well as Los Minimalos Dos, Lucellino Wall, Wo bist Du, Edison…?, Zettel’z (1999) and Porca Miseria! (2003). Ingo Maurer’s enthusiasm and pioneer spirit does not seem to fade at the age of 75. His latest project is Early Future, a desk lamp with OLED (organic LED) in cooperation with Osram, the worlds biggest producer of light sources and lighting systems.

Jack-of-all-trades, design wizard and boundary-breaker
Widely recognised as one of the most innovative and exciting designers of his generation. He has created LED-integrated costumes for the indierock-band OK Go, interactive mirrors for Selfridges Wonder Room, worked as a scientist at Philips and collaborated with many of the world’s top architects and fashion designers including Ron Arad, Zaha Hadid and Hussein Chalayan. Meet Moritz Waldemeyer and his exciting fusion of technology, art, fashion and lighting design.

Moritz Waldemeyer was born in Halle, East Germany. 20 years old he moved to London where he trained as an engineer at Kings College. After he completed his Masters degree in 2001, he worked for a couple of years at Philips Research Labs in Redhill, UK. Since then, he has collaborated with many of the world’s top architects and fashion designers, including Ron Arad (Miss Haze och Lolita Chandeliers), Yves Behar (Swarovski Chandelier Voyage), Zaha Hadid (Z. Island, an interactive design for a kitchen including user interface, lighting and multi-media installation) and Hussein Chalayan (mechanical and luminescent dresses in the collection One Hundred and Eleven). Waldemeyer quite recently took the step to being a designer; his first independent exhibition was a revolutionary version of the a classic roulette table, in corian, using integrated LEDs.

Moritz Waldemeyer’s latest experiment is Twilight. Commissioned by Microsoft’s entertainment brand Zune, the interactive chandelier illuminates the exclusive Zune-to-Zune sharing function that sets Zune apart from the rest by enabling users to share their music with the chandelier itself.

A rising star
Paul Cocksedge, at the present one of Britain’s most talked-about designers, made an acclaimed performance together with Swarovski at the Milan Furniture fair in April. A gleaming drapery consisting of 1440 Swarovski-crystals, in combination with a mirror, created an optical illusion where one of the art history’s most famous characters played the main role. On the 2nd of February 2009 Paul Cocksedge will take the stage at FutureDesignDays.

Now, Paul Cocksedge is hardly unused to attention. Despite his young age his design has already been exhibited at the London Design Museum and the Powerhouse Museum. His work is also represented in the permanent exhibitions at the Victoria & Albert Museum and the Pinakothek der Moderne, Die Neue Sammlung in Munich. Cocksedge’s distinguishing feature is the unexpected, regardless whether it’s about technique or material. His Bulb for example, a “vase-lamp” where the light is switched on and off when you remove the flower, is a perfect example of his creativity and innovative design.

Paul Cocksedge was born in London in 1978. He began his studies at the Sheffield Hallam University to become an industrial designer and then had his MA at the Royal College of Art in London, where he met Joana Pinho, his working partner and the other half of Paul Cocksedge Studio. Studying under Ron Arad, Paul was introduced to Issey Miyake and Ingo Maurer, both of whom staged early exhibitions of his work. Maurer went so far as to give Paul a show within his own show at Milan Design Week 2003. Paul Cocksedge has been awarded the Bombay Sapphire Glass prize and was nominated for London Design Museum’s Designer of the Year. Some of his most well known pieces are Watt?, Pole, and the Veil project for Swarovski.

FutureDesignDays is an experimental workshop. We put the most exciting designers, debaters and freethinkers together and let them interact with each other and with the audience. The aim is to explore ideas about design that will matter to people. That is why a panel discussion is a constant element, wounding up every FutureDesignDays conference. Everyone who has visited us can testify that the invited speakers not very often agree with each other, and the result is often quite intense discussions.

Lighting Designer of Ljus & Gestaltning AB, Sweden
Sandra Edberg is an educated electrical engineer, specialised in industrial design. She also studied art, and then lighting design at KTH School of Technology and Health. Ljus & Gestaltning AB is a consulting firm in lighting, with more than ten years of experience in lighting design and planning of interior and exterior spaces.

Marketing manager, Parans Solar Lighting
Parans is a promising cleantech company which has developed a revolutionary technology that leads natural sunlight indoors through fiber optic cables, which dramatically reduces the need for electric lighting. Parans is in the same industry as other lighting companies, but without even offering a light source in the product; ”We just lead the sunlight into the building, we take control of it and let it out where you need it. Sunlight is essential for our health”, says Rikard Eduards. Parans was awarded the 2008 WWF Carl Mannerfelt Prize for their Fiber Optic Solar Lighting system.

Designer
Monica Förster is one of Sweden’s most internationally renowned designers, and works worldwide with clients like Poltrona Frau, Tacchini, Modus, E&Y Japan, Offecct and Swedese. Her work is categorized by a strong sense of pure form combined and fuelled with a never-ending curiosity for new materials and technology. She has been awarded Designer of the Year, Sweden 2007 and 2006, and was awarded the FutureDesignDays Award 2002.

‘A furniture design graduate, Marcus began his journalism career writing for publications including Blueprint, The Guardian, The Independent on Sunday and Conde Nast Traveller. He launched icon, the international architecture and design magazine, in 2003, and edited the publication until November 2006. In the beginning of 2007 Marcus Fairs (Expert commentator at FutureDesignDays 2005) launched his new blog named Dezeen. Dezeen has ever since been a very active blog site, reporting from every design event that counts. Marcus lives and works in London.