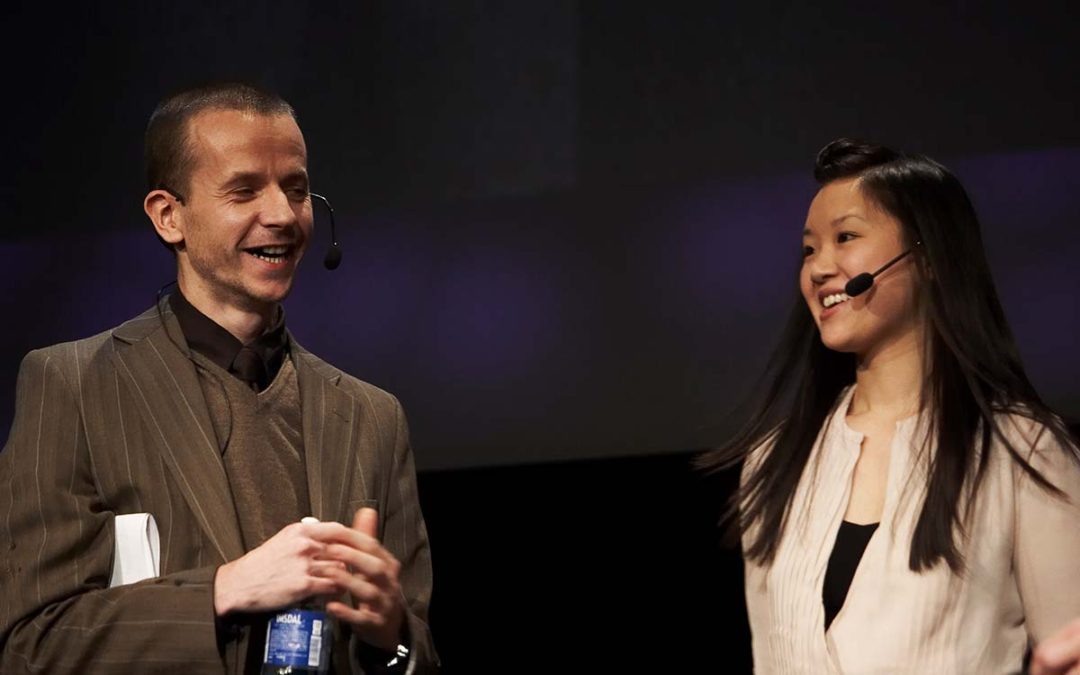 Julian Roberts left school at 16 to study fashion. Today he and his constant companion, Sophie Cheung, are a highly esteemed teaching duo. Roberts took up the post of Professor at the University of Hertfordshire, Hatfield, in July 2004 at the age of 33 – making him the youngest professor in the UK. It was then that Roberts and Cheung’s company, Julian and Sophie, launched a new clothing label, Parc deS EXpositions. The first collection was created as a spontaneous exercise, and at breakneck speed, together with the students in Julian’s class using the Subtraction Cutting technique developed by Chinese Whisper. The collection, entitled ‘Antithesis of TopShop’, was sneak-previewed at a private showing at the London Fashion Week event, making the students the first ever first-year students to show their own work at the event.

When Julian talks about the concept behind Parc DeS Expositions, he explains that it is all about working with and for your design colleagues and a close circle of friends, rather than creating avant-garde collections for models and celebrities. ”Each garment will be created specifically for another member of the group to wear, in their particular size, and for a particular occasion they would like to wear it to.” Every garment is made in two examples, one as a gift to the wearer, the other as a permanent sample for the collection. In this way, the garments in the collection can be copied for sale, and the collection does not get smaller, but increases every season.

Julian and Sophie have also been engaged as visiting lecturers by colleges up and down the country, including the Royal College of Art in London, where they have both studied, Central St Martins College of Art, Glasgow School of Art and Manchester Metropolitan University. In May 2003, they launched their very own ‘On-line Pattern Cutting School’, through which they explain one of their more unusual cutting techniques free of charge.

Julian started off as an Assistant Designer at Jasper Conran. But since 1999 most of his commercial work has been for his own business ventures, involving brands like nothing nothing, Julian And, Julian and Sophie, and Parc deS EXpositions. Some time ago he, he sold all rights and the entire pattern archive of the nothing nothing label on e-bay. Price? Just £1.

Julian has received no less than five New Generation Awards, the last together with Sophie. He has also worked as Consultant Art Director on short projects for Laura Ashley, and collaborates closely with London public relations firm Blow, where he develops home pages, and creates videos and graphics to support all the promising designers represented by the agency.

Julian and Sophie have shown their collections and multimedia shows all over the world, giving us valuable input regarding their know-how and their very different way of creating design.